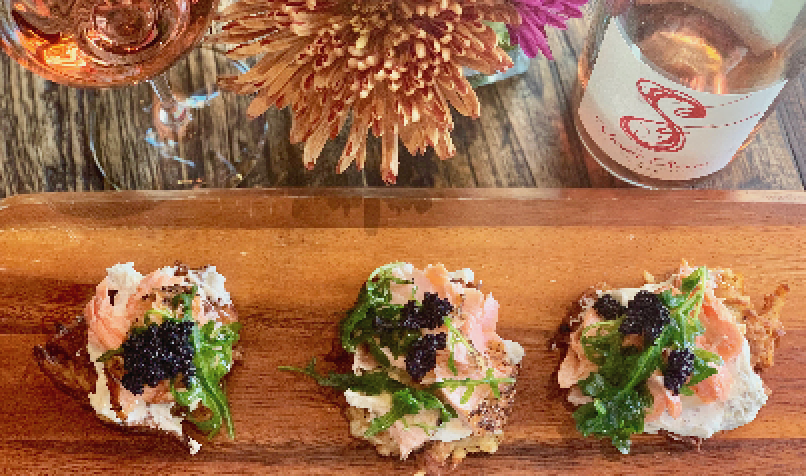 Mrs. Rita has struck again! This time, she took a traditional Jewish latke recipe and spiced it up with some smoked salmon, arugula and caviar. We are fortunate to have fresh smoked salmon from Santa Rosa Seafood Market, which is the key ingredient that inspired this recipe.

Start with the potato latkes: Combine the potatoes and onion into a kitchen town and squeeze all the moisture out. Put into a bowl and toss in the flour, salt, pepper and egg and mix together. With your hands, make little flattened patties of the mixture and set aside.

In a large frying pan, heat the vegetable oil until hot. Carefully place 4-6 potato latkes at a time into the frying pan and fry each of them until golden brown on both sides, then place aside on paper towels to cool.

Make the Dill Creme Fraiche: In a standing mixer, whisk the whipping cream, sour cream, fresh dill and lemon zest together until you get soft peaks. Set aside.

Make the tossed arugula: In a medium bowl, mix the arugula, olive oil, pinch of salt, pepper and lemon juice. Set aside.

Assemble: Over each potato latke, spoon a dollop of the dill creme fraiche and top with a thin bed of tossed arugula, then a layer of smoked salmon and topped with a dollop of black caviar.